How To Catch Snook 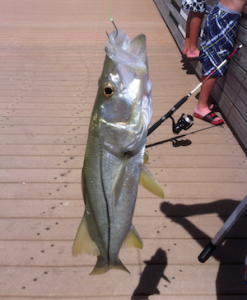 Before you pack up any gear, it’s best to get an idea of what is a snook fish. There are different types, but the one you’re most likely to run across is the common snook (Centropomus undecimalis). Found from central Florida south, around in the Gulf of Mexico and into the Caribbean. it’s a large fish with a black stripe running from the tail to the gills. Its lower jaw protrudes, and it has a silver green color with touches of yellow.

What Tackle Should I Use?

If you want to know how to fish for snook you need to use the right tackle. There are different ways to approach this, but for best results a saltwater spinning rod or bait caster will be necessary. As for the fishing lines, 15 to 30 lb test of braided should work out fine, and you’ll need at least 40 lb test of fluorocarbon leader, although depending on the clarity of the water and fish size. As for the hooks, it’s a matter of personal preference, although circles are popular among those who catch and release snook.

What is the Best Bait for Snook?

The best bait for snook is dependent on the season and where they are feeding. As a rule though, you can use fish that’s in the area as bait, but do add variety because just like people, snook get tired of eating the same thing over and over. Regardless which bait you choose, make sure to change it up every few days: for instance, you can use sardines for three straight days, but on the fourth use a pinfish.

Ask a half dozen anglers as to what bait to use and you’ll get a different answer each time, and that’s something you should expect. This should not discourage you however, as it actually opens the door for a lot of possibilities. Instead of being stuck with a single bait, you can opt for sardines, mullet, pilchards (greenbacks) or shrimp.

The same rule applies when it comes to snook lures. If you want to catch the big fish, make sure the lures cover all the bases, so this means having sinking bait and suspended bait for top water, and they have to be in different colors, sizes and have different actions. Variety is always good, but a spoon and jig should always be part of your fishing gear because they’re so versatile.

The best way to approach this situation is to check the area where you intend to fish. What kind of fish swim there? You may try using those as bait as suggested above, or you can ask the local anglers for advice on the best lures possible. No matter what you choose, make it a point to bring different types so if one bait doesn’t work out you can try another.

How Do I Make a Good Catch?

The best way to learn how to catch snook is to go after them directly. The ideal time to fish is an hour before high tide or during the first three hours as the tide falls. The key is to have moving water. As long as the tide is moving it is fishing time. The snook is an ambush hunter and it will position itself behind structure and wait for the tide to bring the bait fish to it.

Pitch your lures along any inshore structure or close to the docks. Regardless where you pitch, keep in mind that the common snook is sensitive to the movement of the tides, so before you start ask some of the locals for information or check the web. As for the time of day, it varies actually, and it isn’t as important as the tides. In other words, you’ll catch snook if the tide is right whether it is day or night.

Provided you fish in areas where snook are found, you should have no problems catching a few. But if you are after the big fish you will need to be more patient. Florida is a good place to catch some big snook, but be warned that the bigger, the smarter they are, so you’ll need to use different types of lures and baits.

If you plan to go fishing outside the US, check out the snook at the Pacific and Caribbean coasts, as they’re home to some large fish and several potential baits. If you’re a seasoned angler and want a challenge, then you should head to south Florida. If you can catch snook in the Florida waters, then you can catch them anywhere.

The simplest rule is this: buy the best you can afford, and avoid the cheap ones because more often than not they’re just junk. If you’re just starting out, the mid-level rod and reel should do just fine, and save the pricey stuff for later when you’re an accomplished snooker.

When it comes to rods, the choice depends on the size of the snook you’re trying to catch. The general rule is that a one-piece rod will perform better than those that come in several pieces. That being said, having a rod that can be broken down into components is much more convenient, so it’s up to you.
Anglers take a lot of factors into consideration when buying rods, such as length, weight, feel, stiffness, guide material and so on. Aside from the figures, trust your gut feel and instinct as well. If the rod doesn’t feel right in your hands, then don’t buy it even if the specs seem right.

Constantly fishing for large snook can be tiring so it’s best to get the lightest rod possible, in which case those constructed from graphite are ideal. However, they are sensitive and could break if not handled properly.

Now that you know the snook, it’s time you packed up and get after him. No matter how often you read, there’s no better way to learn how to get snook than by going after it. Patience is needed yes, but with the tips given above, you’re bound to get hooked up sooner than later.